I moved recently and have space for my albums, which I took out of storage and now have at my disposal along with my turntable, of course. It was like looking at an old photo album thumbing through those boxes – most albums, but some big 45s. I also have a box of the little 45s, which I’ve yet to break into.

I pulled out “Houses of the Holy” first, which is Led Zeppelin’s “Lovesexy” or in other words, an album that a great artist makes after a string of hits that seems effortless, and which I think might be their best. So maybe the designation is personal, but I’m sticking with it.

“Houses of the Holy” was the first Led Zeppelin album I owned. Prior to that I was at the mercy of my brother’s albums and mix 8-track tapes, which he named “Rock 1,” “Rock 2,” “Rock 3,” and so on, inspired no doubt by Zeppelin. The cover art features naked blond children climbing up a pyramid – or some pyramid-like structure. I was struck looking at it that in our panicked world, it would probably be considered perverted and racist.

I loved it. I wanted to be one of those kids, at the photo shoot, climbing up the rocks, and cracking up between shots with John Bonham, whom I assumed was really funny. Led Zeppelin was the real deal among us kids, which is ironic as I recently read they were pieced together by a producer, not unlike One Direction. But Led Zeppelin was king and deservedly so, no matter how they came together.

Robert Plant was the quintessential rock singer, maybe one small step above Roger Daltrey, but not quite Freddie Mercury who seemed to float above and beyond any and all other rock and roll singers. John Paul Jones was the bassist and like pretty much all bassists we really liked him but didn’t have much to say about him. It’s the usual fate of the bassist and most bassists seem to prefer it that way. Jimmy Page was a guitar god – pure and simple. And John Bonham, John Bonham; those drums ruled our world. Huge pounding beats exploding off in all directions! We were blown away by John Bonham.

Like all young people we had a hierarchy and most everyone would have Led Zeppelin at the top. If not, you could get away with The Stones because they were The Stones; The Who was doable; Rush would just inspire ridicule. They were Canadian, for starters, and the bass player sang and often high, but not high like Robert Plant who could freaking wail! Geddy Lee just sang, well, too high too much.

That’s about it though. It really was Zeppelin at the top and “Houses of the Holy” was a brilliant album. It was a good way to christen my new house – or really the detached garage where my turntable now sits like a time machine awaiting my next journey back in time. Right on.

They’re always diddling around, I run by each day and it’s only about two city blocks that I can see them and they’re always just blahbedy blah standing there or putt-putting around in the little cars – and there’s a green and a tee right there so I should as I run by see at least one shot by someone, but nooooo, some dude is taking fake swings over and over, as if that will help, another is looking at the green like he’s peering into a peep show and I’m just thinking, hit a god damned ball, someone, please hit a god damned ball, but every so often I get to watch someone chip up on to the green or tee off from the hill, and today I even saw a guy crush it – par 3 crush it – and land about three feet from the hole and his buddies all watch the ball until it stops then turn to him, and you know he knows, and I keep running, thinking, it was worth the wait.

I set out to suck on a Certs today with real purpose. I wanted to, well, not bite it, for one; but also to “be one” with my Certs. Seriously. I wondered if the Certs experience in my mouth would be enough to hold my focus, allowing me to enter into a deep meditation while the minty freshness sort of emanated out of me in all directions like a bright green wintry lightbulb of lovingkindness. I bit it in like four seconds.

The answer is no.

Okay, so the dubstep show. That was trippy. And I wasn’t even tripping. I had no idea that happened. Picture these young folk with an array of colorful, brightly lit baubles and bangles, hula hoops and hats, glowballs and whatnot, much of which they swung around in slow sometimes erratic orbits in an otherwise mostly dark room.

They wore big furry bear hats, and sometimes that was about it. They wore footy pajamas with hoods. They even wore beaded masks. I’m not sure what that was all about but it was rather disconcerting mostly because it must be complicated to breathe, let alone drink. And they had gloves with lighted fingertips that they wiggled around in front of other dubsteppers faces like some crazed magician.

The deejays pounded out music with their fists in the air. I couldn’t tell exactly what else they were doing up there. A lot of dancing and then stopping to work on something on a table in front of them. But the music pounded the people and the people jumped up and down ecstatically. The ones toward the back, the really trippy ones, mostly just spun around in circles – often well-lit as well.

But it was cool! Kind of Build-A-Bear meets Cabaret Voltaire cool, but cool like that! I wanna go again – and be almost the oldest guy there. There was an elderly gentleman in a straw hat with a handful of glow stick bracelets on each wrist. He rocked back and forth in the middle of the crowd. I was proud. 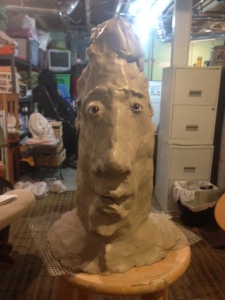 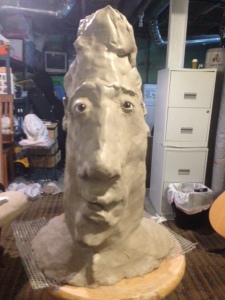 I found out tonight that another person I know and love dearly has cancer. What the fuck? What is this cancer shit? It’s like some alien blob that just invades a person and pops up wherever the fuck it wants to. Then it becomes, and I mean this in no disrespect, like the trouble with tribbles. It breeds like sex-addicted bunnies and it’s all over the place! Leave us alone, cancer! And it’s so indiscriminate! Wouldn’t it be sweet if it took out only the evil? The greedy, the killers, the racists and the rapists? That’s what cancer should actually be – some sort of cosmic punisher. Like someone would say, shit, I have cancer and you could then ask, what the fuck did you do that was truly evil? And they’d have to admit it and make amends, change their entire way of life, and then, and only then, would cancer go into remission. See, that would make sense about cancer. But the way it is now, cancer is its own evil. Preying on whomever – the most innocent, the average, the amazing, and also, sometimes, the evil. And there’s no remission based on the lives, actions, and intentions of the victims. Cancer is stupid and yet apparently smarter than we are. You folks want to believe in a devil? You got it. Cancer. Now we’ve got to find a real god to banish cancer to the depths of hell and beyond. To never rear its ugly head again. God bless you, PB.

I feel like I should say something about Black Friday starting on Thursday. It’s anti-family, anti-Thanksgiving, anti-American, and pro-conspicuous consumption for people who honestly think they’ll save a few bucks, while good people have to leave Thanksgiving dinner and their families for some small number of fools who’ll think they’ll save those few bucks on some piece of electronics, that, and I have it on good information, is sub par garbage that is made by sub par companies that is re-branded as whatever the fools think they’re buying. That 50 inch Panasonic TV is made by some crap company just to fill this pathetic need that doesn’t exist but for the rush for Black Friday Door Buster savings. You lose, the workers and their families lose, we all lose. Stay home and love the people you love. Get up as early on Black Friday as you want, but don’t encroach on Thanksgiving Day. Unless you hate the people who are manning the cash registers and floors of the stores you charge into. You think you save a few bucks, but they and their families’ get fucked. And ultimately so do you.

I’m busy, or whatever, but this might be the coolest film I’ve ever seen. Sita Sings the Blues. It’s beautiful, quite funny and visually stunning. I actually got up during the intermission and got a bourbon and peed and when I got back it was just ending. Monty Python meet Vishnu, with some of the best music I’ve heard in years.