I bought Tangerine Dream’s “Rubycon” ten years after it came out and it was still way ahead of where electronic music was going – ambient already and electronica long before electronica was cool.

The album features “Rubycon Part I” and “Rubycon Part II” on the corresponding sides. They both begin in a moody sort of manner – lush synth voices swirling about (the former) or droning and brooding (the latter), that build into their signature sounds, soft driving synths, evolving and layered over one another, with what were considered almost unrecognizable melodies at the time flowing in and out. They are both powerful and beautiful pieces – brilliantly wrought with the oscillators and envelopes, buttons and sliders of the old analog synthesizers.

There were others at the time, but Tangerine Dream seemed to break into the collective consciousness more than the likes of Cluster, Yellow Magic Orchestra or other early electronic outfits. Eno, of course. Tangerine Dream was maybe more melodic, more palatable to our tastes so early on in the history of the genre(s). And all these guys are at the roots of the tree and to be thanked by all of the branches and leaves.

Pretty much everyone who touched a synthesizer since owes a debt to them all, Gary Numan among them.

Gary Numan’s been given the short shrift, dismissed as a one-hit wonder, or some sort of oddity, when his “Cars” pretty much blew everyone’s mind even if they were among the anti-electronic movement that permeated rock and roll. In those days, among many folks, synths were not real music – the technology was suspect and not a little because disco artists embraced it. People actually burned disco records. Even compared to the serious-mindedness of the Tangerine Dreams, this seemed like just fey pop. 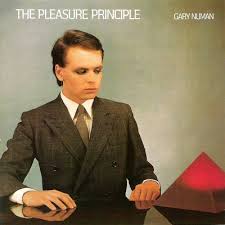 But “Cars” was a revelation. It was drenched in synthesizers, but it was not disco, and you had to admit it kind of rocked out, and it was a certifiable U.S. hit – dropping in beside Bob Seger, Bette Midler, Air Supply and even the Pure Prairie League on the June 7, 1980 U.S. Rock Billboard charts. (He was all over the U.K. charts at the time and for a long time.) The album also featured “Are ‘Friends’ Electric,” which also got some radio play and was thought to be the better song among many.

In “Cars,” Numan sings about retreating into the most immersive techno gadget anyone owned at the time – their car. He sings: “Here in my car, I feel safest of all. I can lock all the doors. It’s the only way to live – in cars.”

“Are ‘Friends’ Electric,” I want to be about the concept of a Facebook “friend”- or more largely, communication in the age of technology – considering his putting it in quotations, but alas it’s not.

Gary Numan and The Tubeway Army (his band) had a sort-of genderless Bowie look but without any “Rebel Rebel” to temper it so seemed rather feminine to the average 1980 U.S. radio listener. I’m not sure if it had anything to do with the scorn he endured, but it might have moved some of the Zeppelin fans toward contempt a teensy bit.

However, had The Tubes “Turn Me On” hit the charts in 1978 when it was released, it might have superseded “Cars” in being the first cool verifiable synth hit in the U.S. – my designation. Yes, it’s got live drums, guitar and bass, but the synthesizers in the beginning sound like Tangerine Dream on speed and dominate throughout. And it’s a great song!

The Tubes embraced technology to make an album that denigrated technology, and particularly the television. “Remote Control” brilliantly and presciently skewers early-on our now ubiquitous obsession with screens of all types. Just take a gander at the cover and note that this was 1978 – 13 years before The Internet went live to the world – and there we are in all of our 2016 glory. Our screens are our pacifiers, and particularly our smartphones, which we grab whenever we want to feel connected, some tiny thrill or just a reason to tune out. Hand me my nookie, I’m feeling bored.

Throughout the album The Tubes equate our relationship with television as love and adoration and with all the emotions that go along with those. “Turn Me On,” is essentially a sex song spotted with television lingo. The next song, “TV is King,” continues in this manner. Here’s the chorus:

The next is “Prime Time,” which also continues the theme to a degree. The rest of the album strays a bit from that except for the final track on side two: “Telecide,” and I must share a rather long sample of the lyrics:

Feeling so much thinner
I need a TV dinner

Television is killing us, we’re seeing real killing on television, and it’s time to be mad as hell and kill the televisions. Synthesizers do not dominate this particular song.

Todd Rundgren produced, “Remote Control” is incredibly tight, wickedly intelligent and comfortably thematic (that can go south), and really, really way ahead of its time.

The Tubes knew all along.