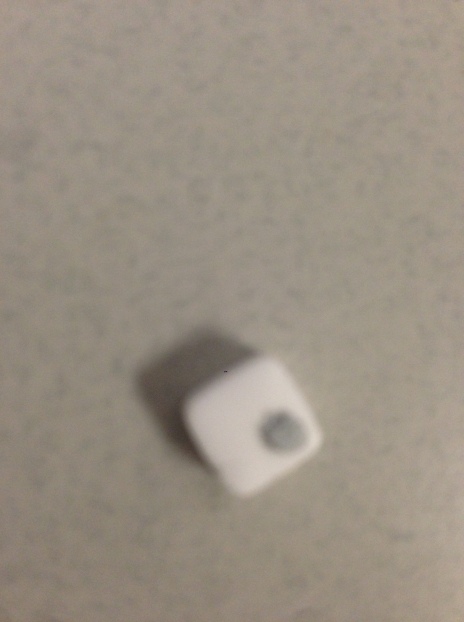 Take a look at my Altoid. The graniness of the photo suggests that it might not actually exist, but it does and that’s because my photo lens is scratched. That is how my Altoid tumbled out of the metal box. That gray dot was there when it landed. And I don’t like that gray dot one bit. Except for the fact that you can see George Washington in it. But either way, what’s it doing there? What’s George Washington doing etched into a gray dot on my Altoid?

The intruder leaves no clue as to what it is. It looks like cement, but not up close. Or clay maybe. Why would there be cement or clay on my Altoid? I smell concrete boots and a drop into a deep reservoir. Don’t you? Maybe not. It could be gray paint. Maybe one of their worst employees got it in his thick skull that gray Altoids would fly off the shelf, dumbass, they totally wouldn’t, and now I have this soiled Altoid to deal with.

Altoid. Sounds like a robot. That could have something to do with it. I don’t know.

I can’t eat the Altoid because I can’t be certain the gray matter isn’t poisonous. I could have someone else try it for me but I’m no emperor. If I were I would do something about gray dots with George Washington showing up on people’s Altoids. I would also do away with robots. I think.

I have other Altoids but this one has kind of stopped me in my Altoid desires. It’s like how some guys freak out when their wife has a baby – usually when they see it coming out but that makes sense because that is the moment of truth, baby!

The problem with the Altoid is really the contrast. Imagine if you will that same intruder if it were white. It would blend in, right? And I would just think, “Ooh, I got more Altoid for the price of one!” But it could still be the same intruder – a lamb in sheep’s clothing is all. I saw a fox last Friday. It ran right in front of my car. Stupid fox. But they’re smart! Foxes are.

Whoever put this intruder on my Altoid is also smart – really smart. But I’m not done thinking this one through. There’s got to be something about it online. Maybe a video or something.

If you know everything tell me what the heck is intruding on my Altoid. You don’t know everything. No one does. Not even George Washington. Or the fox.

Born in Iowa City a few days after John Kennedy was shot and killed. Grew up in Minneapolis, on Lake Calhoun. Southwest High. University of MN. Lived in a two-room cabin in the woods on Lake Superior. Cabin on South Long Lake. There's a lake theme developing here. View all posts by luke